only shows the 3 sun-tracking mounts, there were 8 other tripods (cameras..film & digital, video-cameras).

I'm still working thru all the footage. Did the videos (rectilinear, 360 VR, time-lapse), then 4K video.

before that WASTED 4 days doing the 360 VR

Need to get 4 rolls of film developed:

[ glitch in automated controller SEM (Solar Eclipse Maestro) on Macbook Pro. 30 min before Totality, all 3 cameras were detected & did test "fire". Then, it went on "Simulated Time" (!!??), I changed back to "Actual Time". The Macbook Pro had startup GLITCH..took like 5 min to bootup. I.E., "spinning beachball" indicating some sort of problem ]

The sun-tracking mount #2 (also controlled by 2nd Macbook Pro running SEM), worked. However, 1 of the corona cameras (on 600mm f5.6)was out-of-focus!! (the images are somewhat salvageable). The other camera (on 800mm f8) were fine

Below pic is equipment being broken down, placed into cases/bags, about to be loaded into Jeep. 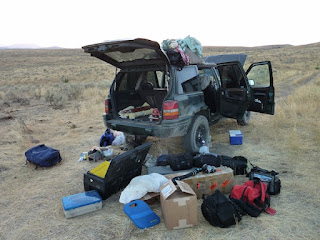